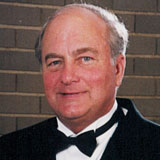 As a student, Jerry was a member of the National Honor Fraternity, president of Pi Kappa Alpha fraternity, and a Distinguished Military Student who went on to serve as an Army Reserve Company Commander at Ft. Leonard Wood. Jerry began his professional career with the Olin Corporation, where he received two patents for composite coining metals chosen by the U.S. Treasury to replace silver in quarters and dimes. Jerry later owned Community Building Centers of Butler, Nevada, El Dorado and Lamar, Missouri, and Complete Building Center of Blue Springs. He was also a community leader, serving on many boards including the Jackson County Board of Election Commissioners and as past president of the Blue Springs Rotary Club.

Read more about Jerry’s achievements and contributions in the Kansas City Star. Missouri S&T is very grateful to the OGS members, alumni and friends whose memorial gifts to the Jerrold M. and Judith C. Alyea Pi Kappa Alpha Achievement Scholarship will provide academic opportunity while honoring the legacy of a loyal alumnus, leader and friend.