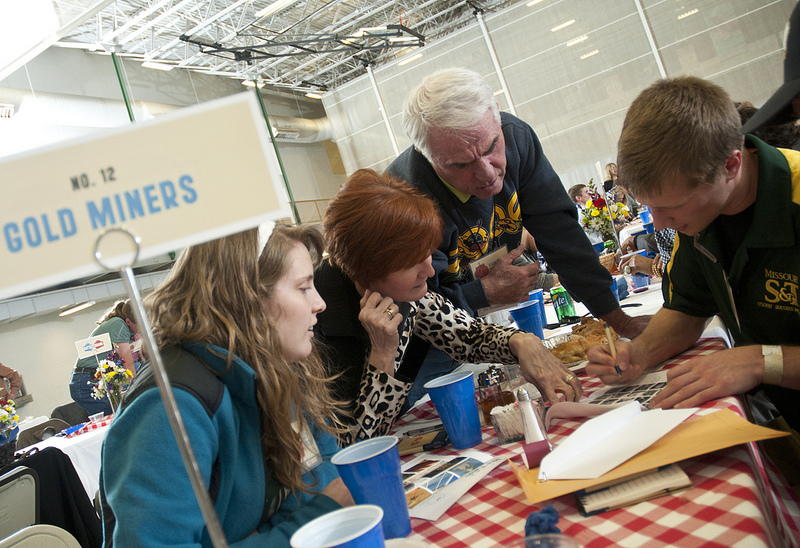 Student-donor teams worked together at the Battle of the Brains trivia competition to earn the title of Biggest Brainiac. Pictured above (left to right) are S&T student Grace Holsten, donors Cathy and Rich Eimer, and S&T student Daniel Schrader.

Armed with mental ammunition and fortified with fried chicken, scholarship students and donors teamed up for Missouri S&T’s first Battle of the Brains on April 19. With a new spin on the university’s traditional scholarship banquet, the epic endurance event kicked off with a picnic-style feast featuring fried chicken, catfish, local craft beers and wine – and Rolla’s own Slice of Pie.

In her opening remarks, Chancellor Schrader underscored the transformational power of scholarships and thanked the many donors whose generosity continues to change lives.

“Nationwide, economic hardship is making a college education increasingly unaffordable for many families,” she said. “This is also true on our home front. Missouri S&T awarded $34.5 million in student financial assistance for the current academic year. Thanks to our generous donors, many of whom are here tonight, this included 8,710 scholarships. We are deeply grateful to our donors. And we are immensely proud of our scholars. You are partners in building a stronger future.”

Special thanks to Wayne Huebner, chair of Materials Science and Engineering, for serving as game emcee. Congratulations to the winning team: Darlene Ramsay, MetE’84, Chris Ramsay, MetE’83, MS MetE’85, Bob Pahl, ChE’68, MS ChE’70, PhD ChE’74, and Ginny Pahl. And congratulations to the students on the second-place team, each of whom received a $250 book scholarship: Eli Steinbeck, Margaret Eimer, Oliver Thompson, Pater Daniels, Cody Longsworth and Joshua Smith. Well done, Brainiacs! Photos from Battle of the Brains and other MinerFest activities can be viewed and downloaded here.

Are you wondering how our Biggest Braniacs earned their titles?  Here’s a short sample of the questions from our first-ever Battle of the Brains:

Round 2: A Wee Bit Green

1.  On the Rolla Campus, how many times has St. Pat’s been the BEST EVER?
2.  When was the last year Alice made an official appearance at St. Pat’s?
3.  There are eight elements that are required to be included in the St. Pat’s sweatshirt design. Name five.

1.  On the Big Bang Theory TV Show, what is Sheldon’s catchphrase after he makes a snarky comment?2.  What does WOPR stand for in teh 1983 movie War Games?
3.  What is the  name of the fraternity the nerds join in the Revenge of the Nerds?

Round 4:  All About the Benjamins

1.  Whose face is on the $10 bill?
2.  What was the first company to offer a charge card that could be used at multiple locations?
3.  How many denominations of U.S. currency are in circulation today?