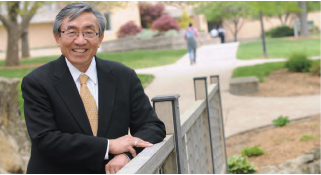 It isn’t every engineer who becomes a pioneer on the frontier of globalization. And it isn’t every executive who leads two American corporations into the world’s largest developing economy. David Wang, MS EE’77, is that leader.As president of Boeing China and vice president of The Boeing Co. from 2002 until his retirement in 2011, Wang oversaw the company’s growth in China. Prior to joining Boeing, he served as chair and CEO of General Electric China.

Throughout his distinguished career, Wang has remained a proud Miner and generous donor: serving on the Academy of Electrical and Computer Engineering, sharing his expertise as a Chancellor’s Leadership Academy speaker, and giving back as a member of the Order of the Golden Shillelagh.

Now Wang and his wife, Darlene, have established the David C. and Darlene Wang Endowed Scholarship for Electrical and Computer Engineering.

“Darlene and I were lucky to live in Beijing during an era of groundbreaking U.S.-China business initiatives,” said Wang, who received the city of Beijing’s top honor, the Great Wall Friendship Award, for his commitment to social and economic development in the Chinese capital. “We want to express appreciation for our many opportunities by giving back through this scholarship.”

Wang was born in China’s Fujian Province. He earned a bachelor of science degree in electrical engineering from Saint Louis University in 1967 and operated a family manufacturing business in Jakarta for three years. After returning to the United States, he worked for St. Louis-based Emerson Electric and completed his master’s degree in electrical engineering at Missouri S&T. He received a professional degree in the field in 2009.

Darlene Wang earned her bachelor of science degree in elementary education from the University of Missouri-St. Louis. She is retired from the Committee of the Beijing International Society and a former board member of the International School of Beijing, where she founded the
Parent Teachers Association.