Leading from the heart 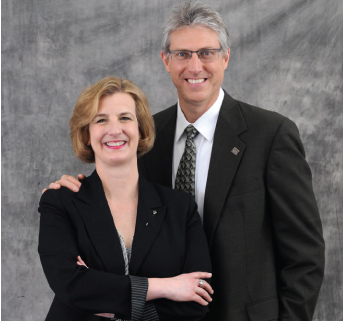 Chancellor Cheryl B. Schrader and her husband, Jeff, were the first donors to accept the 20/20 challenge.

When Chancellor Cheryl B. Schrader heard that Missouri S&T had received state funding for 20 new scholarship endowments — contingent upon raising matching funds from private donors — she did more than get to work fundraising. She made a gift.

Schrader and her husband, Jeff, were the first donors to rise to the 20/20 Challenge, endowing a new, need-based scholarship.

“Unrestricted scholarship funding continues to be the No. 1 priority at Missouri S&T,” Schrader says. “Scholarships are also more important than ever to students from families struggling to make ends meet. When the University of Missouri System announced state funding for new scholarship endowments — with the contingency that we leverage every public dollar with a private one — Jeff and I immediately decided to participate as donors.”

In recognition of their endowment gift, the Schraders were inducted into the Order of the Golden Shillelagh in April, joining a circle of donors who have strengthened and sustained the university for nearly four decades.

“They also support the university financially and have provided matching funds for the first of 20 new, need-based scholarships.”

Investing in the future is personal for the Schraders, who are parents. Their son, Andrew, is majoring in mechanical engineering at Valparaiso University, and their 6-year-old daughter, Ella, plans to become a scientist or engineer.

“Every endowed scholarship provides young men and women for generations to come with the gift of an education,” Schrader says. “There is nothing more vital to our university’s mission than the opportunity embodied in these permanent funds.”

For Jeff, the scholarship challenge not only secured additional public funding for Missouri S&T but also sent a message about the power of public-private partnerships.

“These new scholarships for Pell-eligible students will make a difference where it matters most – in homes where affording a college education often isn’t an option,” Jeff says. “I join Cheryl in thanking the S&T donors who rose to the challenge with passion and personal generosity, as well as the UM System for making need-based scholarships a priority.”