We are pleased to introduce the new members of the University Advancement team who have joined S&T in development and alumni relations positions. Please do not hesitate to reach out to these staff members with questions. They would be delighted to assist you! 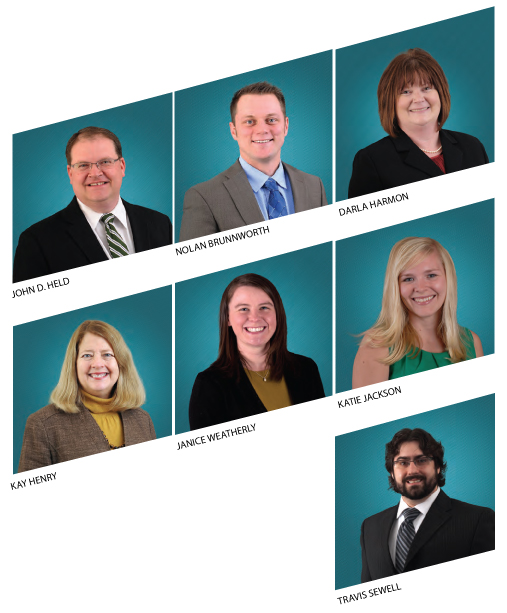 John D. Held, executive director of development, comes to Rolla from Storm Lake, Iowa, where he served as director of major gifts for Buena Vista University and helped lead a $27 million comprehensive campaign. A Missouri native with more than 20 years of experience in fundraising and nonprofit management, he holds a bachelor of arts degree from Missouri Valley College. Held serves as the liaison to geological science and engineering, materials science and engineering, mining and nuclear engineering, petroleum engineering, the Student Design and Experiential Learning Center, and alumni in the Midwest and northern plains. Contact him at heldjohn@mst.edu or
573-341-6533.

Nolan Brunnworth, senior development officer, is a Missouri native who holds a bachelor of science degree in marketing management and a master’s degree in business administration from Southeast Missouri State University. He previously worked as director of development for Southeast Missouri State University and as director of marketing for a packaging manufacturer based in Kansas City. Brunnworth resides in St. Louis. He is the liaison to mechanical and aerospace engineering and alumni in the northeast. Contact him at brunnworthn@mst.edu or
573-341-6161.

Darla Harmon, senior development officer for corporations and foundations, previously served as the director of development for Drury University in Springfield, where she resides. Harmon specializes in grant writing and prospect research and identification and has raised more than $1 million from a variety of foundations and giving organizations. She holds a bachelor of arts degree in English and a master’s degree in communication from Drury. She is the liaison to engineering management. Contact her at harmond@mst.edu or 573-341-6596.

Kay Henry, senior development officer, is a Rolla native who attended Missouri S&T before transferring to the University of Kansas, where she earned a bachelor of arts degree in linguistics and master’s degrees in French and linguistics. She previously served as the associate dean and director of the executive MBA programs for the Olin Business School at Washington University in St. Louis, where she resides. She was the founding director of the MBA for executives program at the Jones Graduate School of Management at Rice University. Her extensive international experience includes two years in Dubai, U.A.E, where she served as assistant dean of the College of Business Sciences in Zayed University. She is the liaison to chemical and biochemical engineering and chemistry and to S&T alumni living in Texas, Oklahoma, and the southwest. Contact her at henrykay@mst.edu or 573-341-4490.

Janice Weatherly, annual giving officer, is a Missouri native who holds a bachelor of science degree in public policy administration from the University of Missouri-Columbia and is completing a master’s degree in leadership and management at Webster University. Weatherly previously spent a year serving in AmeriCorps as the development assistant for Missouri’s Franklin County CASA, where she developed the organization’s first annual giving campaign and managed public relations. Contact her at jkwv3b@mst.edu or 573-341-4934.

Katie Jackson, assistant director of alumni and constituent relations, previously worked for Missouri S&T’s student affairs division as a student program administrator. She holds bachelor of arts degrees in psychology and religion from Concordia College in Moorhead, Minn., and a master’s degree in education from the University of Southern Mississippi. She is currently completing doctoral coursework in educational leadership and policy analysis at the University of Missouri-Columbia. Contact her at jacksonkj@mst.edu or 573-341-6034.

Travis Sewell, manager of alumni relations, previously worked for the Mizzou Alumni Association as a program assistant for legislative advocacy and constituent relations. He is a graduate of Truman State University with a double major in history and philosophy/religion and a double minor in English and African/African American studies. He has completed some graduate coursework in African American history at the University of Missouri-St. Louis. Contact him at sewelltd@mst.edu or 573-341-4897.