Comments Off on Turf Time: A Tulsa Team issues the challenge 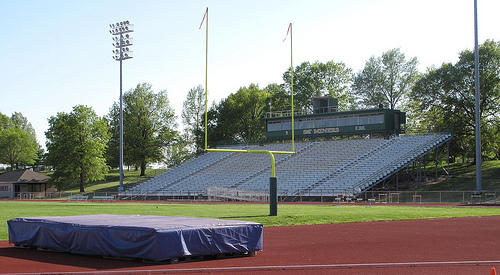 Four alumni from Tulsa have launched a challenge to take the turf over the top. Their inspiration: a longstanding commitment to Miner athletics – and a major financial investment from students.

When this quartet of Miners heard that the Student Council voted to fund 75 percent of the turf project at Allgood-Bailey Stadium and the intramural field through student activity fees, they decided it was time to rally alumni support. The result is the $150,000 Tulsa Turf Team Challenge, established by Keith Bailey, ME’64, and his wife Pat; Steve Malcolm, CE’70, and his wife Gwen; and Kristie, EMgt’74, and John, EMgt’74, Gibson.

The turf project’s total cost is $2.4 million, with $1.8 million funded by student activity fees and $300,000 provided by reinvestment funds from the university’s geothermal energy project. The remaining $300,000 will come from private donations – and the Tulsa Turf Team Challenge is providing a 1-to-1 match for every dollar contributed.

“This is teamwork in action,” says Bailey. “Missouri S&T students have taken the initiative and raised the lion’s share through their activity fees. It is important that alumni join them in realizing this dream for our athletic fields.”

The alumni behind the challenge are all loyal supporters of Miner athletics – and two were student-athletes themselves. Bailey, who played football and basketball as a student at Rolla, is a university trustee and lead donor to Allgood-Bailey Stadium and the Miner Dome, along with his wife Pat. John Gibson played basketball for the university, and he and Kristie were major donors to the Miner Dome. Malcolm and his wife Gwen also supported the Miner Dome as major donors.

In addition to Allgood-Bailey Stadium, the intramural field will be turfed as part of the project. Both fields will be striped for football and soccer. The stadium turf is scheduled for completion by Homecoming on Oct. 18, 2014. The intramural field will be completed by April 2014. The fundraising deadline is June 30, 2014. For more information on the Tulsa Turf Team Challenge, contact John Held, executive director of development, at 573-341-6533.