Comments Off on Postmark: Gratitude – A pen-and-paper tradition unites students and their scholarship donors 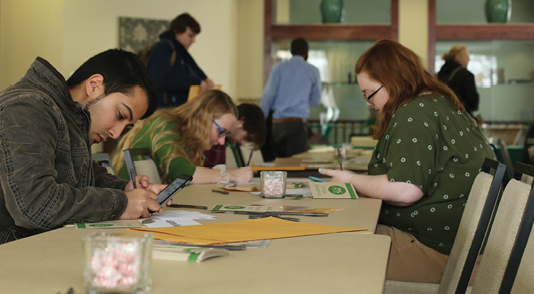 The first week of classes is a rite of passage — a time for new starts, settling in and a little sleep deprivation. It’s a week when students learn what their professors expect, how to navigate from the dorm to that 8 a.m. lecture and where to find the best pizza.

At Missouri S&T, the first week of classes is also something else: a time for gratitude.

During the first week of every fall and spring semester, S&T scholarship students do something decidedly “old school” in the Instagram age — they pick up pen and paper and write to their donors. This past fall, a record 1,600 students (100 percent of endowed scholarship recipients) participated in this special program – and 2,000 thank-you notes postmarked Rolla made their way across Miner Nation.

“These letters are powerful affirmations of the relationship students and scholarship donors share,” says Chancellor Cheryl B. Schrader. “Our donors learn firsthand how much their scholarships mean, and the students blessed by this financial support have the opportunity to say thank you.”

Scott Marchetti is one of those students. A senior in chemical engineering, he has received scholarships since he first arrived at S&T. This year, he holds the George Jamieson Scholarship for Chemical Engineers and the James E. Bertelsmeyer Scholarship for Lambda Chi Alpha Fraternity.

“I considered a lot of schools before choosing Missouri S&T,” says Marchetti, whose father, Mike Marchetti, MinE’81, is also a Miner. “One of the largest factors was the scholarship award I had coming into school.”

“Dr. Sitton was one of the first mentors I had at Rolla,” says Ling, a portfolio manager for Shell Oil Co.’s downstream acquisitions and divestments group. “He taught my very first introductory class in chemical engineering. The final project was to carve the PVT (pressure volume and temperature) diagram for water out of a block of balsa, which I still have in my study!”

Once a scholarship student himself, Ling sees the endowment as a way to give back. “One word sums it up best – legacy,” he says. “Scholarships helped me to become part of the chain of alumni supporting future alumni.”

A first-generation college student who came to Rolla on scholarship, Steve Rector, PetE’72, MS PetE’73, also believes in giving back. Today, as president of RIM Operating Inc., he heads a Denver-based oil and gas exploration and production company.

“My career started from a scholarship,” says Rector, who received financial support from Standard Oil of California (now Chevron Corp.). “The scholarship was great, but an even more important benefit came with it, a summer job. I had that scholarship all four years of my undergraduate education.”

Last fall, Rector and his wife, Susan, received thank-you notes from 31 students who receive financial support through the Stephen and Susan Rector Petroleum Engineering Endowed Scholarship. A few weeks later, during Homecoming, he met with six of the students who hold his scholarships.

“We had a great conversation about life and the ups and downs of the oil and gas business,” says Rector. “I came away with a feeling that the industry would be in good hands in the future.”

One of the students who met Rector that day was Evan Mateer, a junior in petroleum engineering, who says she chose S&T for its academic reputation. It also didn’t hurt that she grew up with a Miner in the house: Mark Mateer, Chem’76, MetE’77, MS MetE’81, is her father.

“I have held the same scholarships since my freshman year, and I am thankful for each donor,” says Mateer. While this future petroleum engineer hasn’t decided whether graduate school or a job is in her near future, she is sure of one thing: “The path to graduation is daunting, and scholarships truly make a difference.”