Comments Off on Pouring the Cornerstone on a Better Future

Pouring the Cornerstone on a Better Future 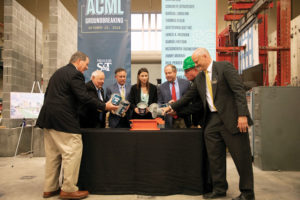 Major donors and members of the university community pour the cornerstone on the Advanced Construction and Materials Lab on October 12.

The donors who paved the way to a $6.5 million lab expansion in Butler-Carlton Civil Engineering Hall gathered in October to pour the cornerstone on the Clayco Advanced Construction and Materials Laboratory. The lab marks the final phase of a $10.5 million initiative to advance S&T’s leadership in infrastructure engineering. “The lab will be one of the finest research centers in the world for construction materials and methods,” said Chris Maples, interim chancellor.

A U.S. Department of Transportation grant for $2.5 million in testing equipment launched the first phase. The second phase added new faculty positions in civil, architectural, and environmental engineering and materials science and engineering. The final phase will add 16,000 square feet of research space to the existing high-bay structures lab.

The lab expansion received support from the University of Missouri System in June 2017 when President Mun Y. Choi committed $1.6 million, identifying the project as a strategic investment for the entire system.

A bequest from James Heidman, CE’65, MS CE’66, was also instrumental to funding the lab, as well as faculty endowments in civil, architectural and environmental engineering.

In February 2018, ARCO Construction Co., its founders and S&T graduates employed there made a $300,000 contribution to the lab — and held a special event in St. Louis to encourage other alumni in the construction industry to step up and support the lab. ARCO was co-founded by retired chairman Dick Arnoldy, CE’69, MS EMgt’73, and president and chief executive officer Jeff Cook, MS EMgt’94.

With the concrete dry and the cornerstone set, construction now begins on a lab that will pave the way to a stronger future.

“Infrastructure is what sustains our quality of life, supports our economy and secures our nation,” said Joel Burken, Curators’ Distinguished Professor and chair of civil, architectural and environmental engineering. “Thanks to the support of our generous donors, Missouri S&T is rising to the challenge of building a stronger, smarter, safer and more sustainable future.”