Pride inspires a scholarship and passion for student design 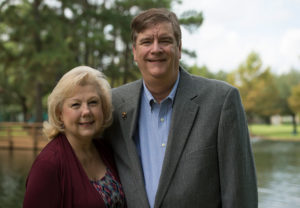 Bill Brune, CSci’73, remembers the days when computer programming involved feeding punch cards into a mainframe computer that filled an entire room. “All of us from the 1970s remember waiting for jobs to run on the IBM 360 and getting the printouts back, only to find a typo on a punched card and doing it all over again,” says the OGS member and Miner Alumni Association board member.

By the time Brune retired as lead program manager for Hewlett-Packard’s Global Data Center Services, the dinosaur days of key punch had long been supplanted by the microprocessor. “In 1973 we were communicating at 1,200 bits per second (bps),” he says. “By 2015 I could connect to the Internet at 83 million bps per second.”

Brune launched his career at Texas Instruments as a programmer in 1973 and went on to work for a number of companies including Price Waterhouse Coopers, El Paso Natural Gas and Hewlett-Packard. He holds an MBA from the University of Houston and was inducted into S&T’s Academy of Computer Science in 2015.

Over four decades of IT leadership, Brune spearheaded everything from office automation to systems architecture. He also remained an involved S&T alumnus, serving on the Miner Alumni Association board of directors, recruiting prospective students as an admissions ambassador in the Houston area, and spending countless hours championing the Solar Car Design Team.

“Every time I’m with the team I’m impressed by their energy, creativity, knowledge and ability to collaborate,” says Brune, who mentors the team, travels to competitions, and has even been known to assist the team cook. “I’m relieved I don’t have to compete against them.”

As a member of Miners by Design, a group of donors who support S&T’s 20 student design teams, Brune is a passionate champion of hands-on learning.

“I think the most important change at S&T has been the addition of an experiential learning requirement for graduation,” he says. “Real world experience beyond the classroom builds well-rounded students.”

This past year, Brune and his wife, Carolyn, established the William K. and Carolyn J. Brune Scholarship Endowment in support of undergraduates majoring in computer science and students who serve as team managers or leaders on student design teams.

“The education I received and friends I made shaped me as a person and prepared me for my career. I feel deeply about giving back,” says Brune, who credits S&T alumni Gary Havener, Math’62, and Jim Bertelsmeyer, ChE’66, with inspiring the gift. “They both chose to see the results of their philanthropy sooner rather than later. Carolyn and I were inspired by that decision.”