Comments Off on Doubling the space where dreams are designed

Doubling the space where dreams are designed 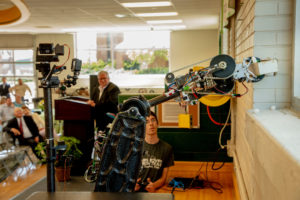 A Mars rover removes the first brick from the west wall of the Kummer Student Design Center.

When Valkyrie’s robotic arm refused to budge, members of the Mars Rover Student Design Team kept their cool. In a room full of people gathered to break ground on the Kummer Student Design Center expansion, team members searched for a solution. Finally, with a reboot, the rover sprang to life and pulled a brick from the design center’s west wall. “The expansion is officially underway,” said Chris Ramsay, MetE’83, MS MetE’85, assistant vice provost for student design and experiential learning. “We’ve been working toward this day for a long time and it’s great to finally be here.”

More than 100 alumni, donors, students and friends gathered on April 26 for the groundbreaking on the expansion, which will add 8,000 square feet to the design center, home of Missouri S&T’s 20 student design teams. The honor of launching demolition went to Valkyrie, the newest Mars rover designed and built by S&T students, which will compete May 30-June 1 in the University Rover Challenge at the Mars Desert Research Station in Hanksville, Utah.

“I can remember when there were only a few design teams operating in an overcrowded Quonset hut-type building over on State Street across from the old power plant,” said trustee and major donor Mike Bytnar, ME’68, MS EMgt’73. “Watching the design center grow has been amazing. I want to tell all the student design teams how proud you make us feel as alumni.”

In the eight years since the dedication of the Kummer Student Design Center in 2011, the number of student design teams has doubled, while the number of students participating on teams has tripled to more than 1,200. The expansion will include additional manufacturing and fabrication bays, a larger machine shop, upgrades to the welding, waterjet and composites labs, new labs for electronics and synthetic biology (iGEM), and a remodeled innovation suite.

Missouri S&T gratefully recognizes the major donors to the Kummer Student Design Center expansion and thanks them for their support.

Keith, ME’64, and Patricia Bailey

The Estate of John Schork, MetE’47